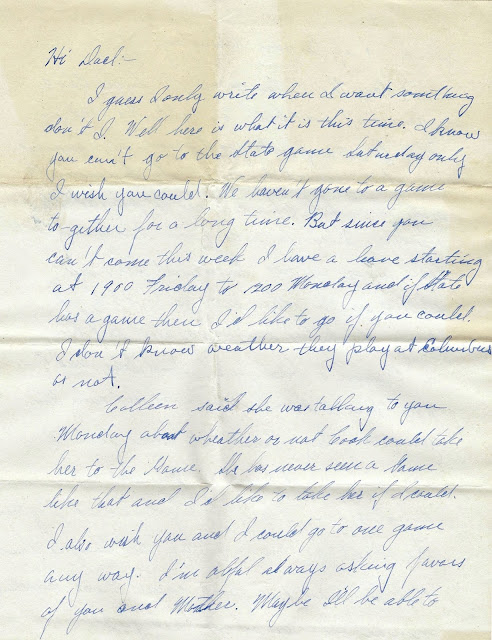 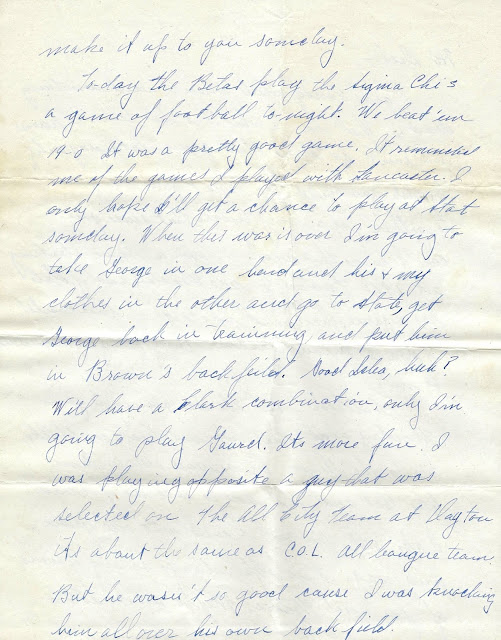 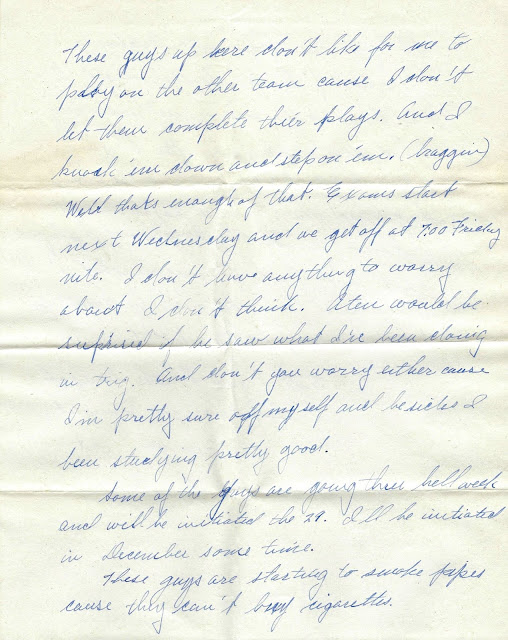 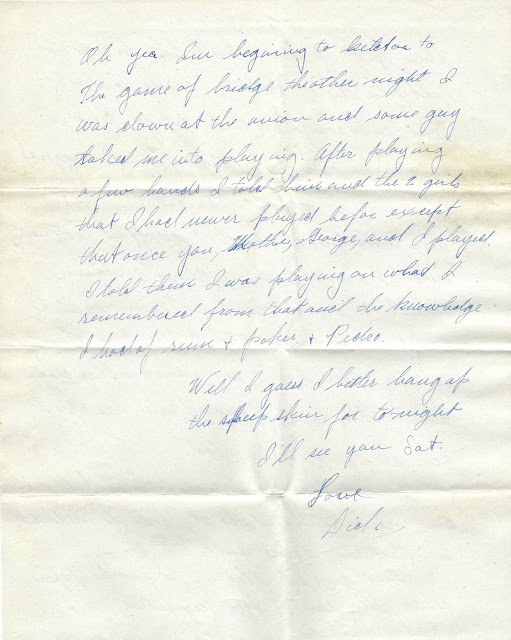 I guess I only write when I want something don't I. Well here is what it is this time. I know you can't go to the State game Saturday only I wish you could. We haven't gone to a game to-gether for a long time. But since you can't come this week I have a leave starting at 1900 Friday to 1200 Monday and if State has a game then I'd like to go if you could. I don't know weather they play at Columbus or not.

Colleen said she was talking to you Monday about wheather or not -?- could take her to the Game. She has never seen a Game like that and I'd like to take her if I could. I also wish you and I could go to one game any way. I'm awful always asking favors of you and Mother. Maybe I'll be able to make it up to you someday.

To-day the Betas play the Sigma Chi's a game of football to-night. We beat 'em 19-0. It was a pretty good game. It reminded me of the games I played with Lancaster. I only hope I'll get a chance to play at State someday. When this war is over I'm going to take George in one hand and his & my clothes in the other and go to State, get George back in training, and put him in Brown's back field. Good idea, huh? We'll have a -?- combination, only I'm going to play Guard. It's more fun. I was playing opposite a guy that was selected on The All City Team at Dayton it's about the same as C.O.L. All league team. But he wasn't so good cause I was knocking him all over his own back field. These guys up here don't like for me to play on the other team cause I don't let them complete their plays. And I knock 'em down and step on 'em (braggin')

Well that's enough of that. Exams start next Wednesday and we get off at 7:00 Friday nite. I don't have anything to worry about I don't think. -?- would be surprised if he saw what I've been doing in trig. And don't you worry either cause I'm pretty sure of myself and besides I been studying pretty good.

These guys are starting to smoke pipes cause they can't buy cigarettes.

Oh yea. I'm beginning to catch on to The game of bridge the other night I was down at the union and some guy talked me into playing. After playing a few hands I told him and the 2 girls that I had never played before except that once you, Mother, George, and I played. I told them I was playing on what I remembered from that and the knowledge I had of rum & poker & Pedro.

Well I guess I better hang up the sheep skin for to-night.
I'll see you Sat.


I love old handwriting and letters. This one was only $1, and the author drew me in with the first line - turns out, what he wanted was to spend time with Dad. Unfortunately, there wasn't a date or a last name for further investigation, but there's still plenty to give us a snapshot of this young man's life. I gathered this was written in war-time, by a college student talking about Ohio State football. He also might've been a football player from Lancaster, Ohio. I'm from the Lancaster area as well, but the letter was found in a different town, which was a nice surprise!

If I wasn't sure what word was written,
I marked it -?- I welcome any guesses or
further information. Just wanted to share!


You may use these scanned images
in your art, either digitally or in printed form.
Just please don't sell them 'as is' - thank you!
Posted by Lilac & Lavender at Saturday, March 07, 2020