"There is no season when
such pleasant and sunny spots may be lighted on,
and produce so pleasant an effect on the feelings,
as now in October."

Every day I notice a little less color beyond my window panes.
In an effort to preserve a bit of October's beauty, this morning,
I grabbed a jacket and headed outside.  I visited a few golden maple trees,
a mixed up forsythia, which always blooms in Autumn
instead of Spring, and my hydrangea bush.

Once I'd gathered the branches and blooms, and after I'd enjoyed a little walk around the yard, I came back indoors.  Originally I'd wanted to make a kitchen table centerpiece, but soon realized everyone would probably be eating on their laps if I used the large branches... so I moved on to my blanket chest in the corner.  Much better.  There was more room to spread out and be dramatic. 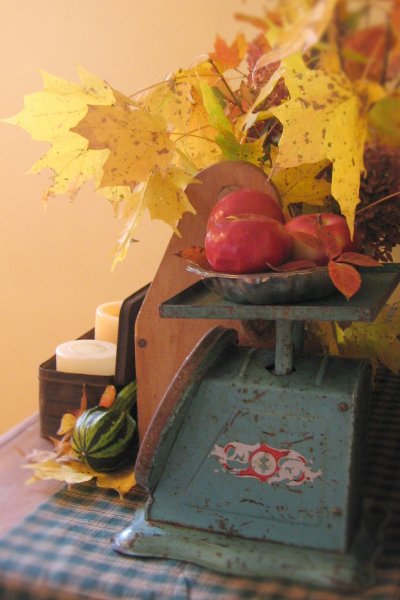 I started with an old wooden tool carrier, and placed 3 large canning jars inside.  Next I dusted off my blue kitchen scale, added a shallow dish with apples on top, and set that to the right of the carrier.  An old tin, with 3 candles inside, went in front and slightly to the right.

I added water to the canning jars, and re-cut the branches at a 45 degree angle, then smashed the ends with a hammer.  I know it seems like a lot of trouble to go through for a few branches, but it makes the arrangement last longer, so...  After the branches were arranged to my liking, I added hydrangea, but grouped them more toward the left/center, to balance the tin and scale on the right. 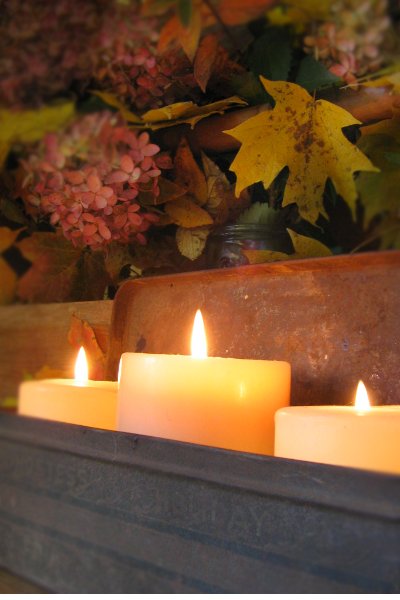 I gathered up some little green gourds my mom gave me... they harvested quite a crop from their compost pile... and placed those around the tin.  There were leaves all over the floor from the branches.  Too pretty to waste, I used them as filler... tucked in here and there next to the apples and gourds, or placed between the branches.

A few things to remember ~ always keep leaves and flowers
a safe distance back from burning candles,
and of course, never leave them burning unattended. 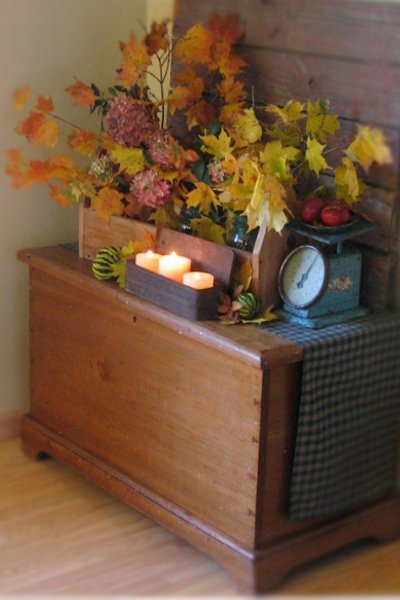 Hope this inspires you to look outside your window
and bring a touch of October's beauty in to your home as well...
before it's too late! 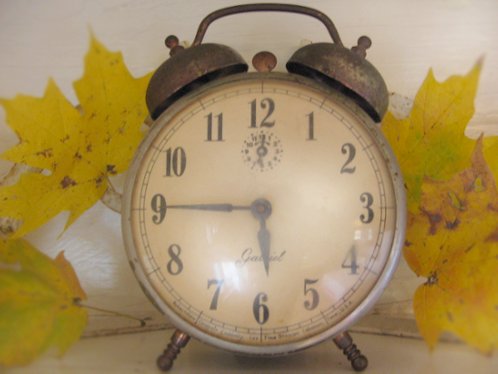