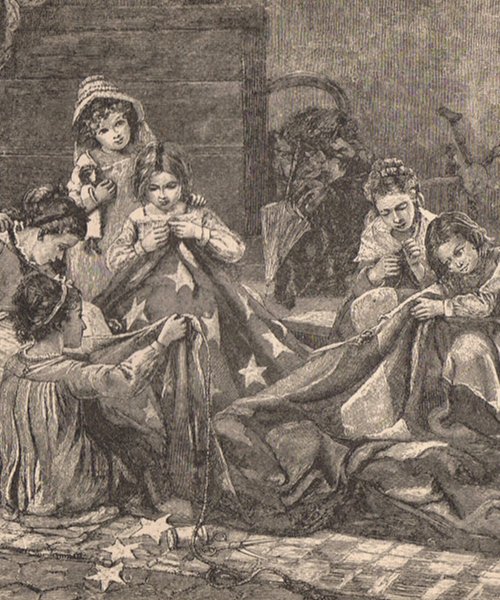 In the silent gloom of a garret room,
With cobwebs round it creeping,
From day to day the old Flag lay-
A veteran worn and sleeping.
Dingily old, each wrinkled fold
By the dust of years was shaded;
Wounds of the storm were upon its form;
The crimson stripes were faded.

'Twas a mournful sight in the day-twilight,
This thing of humble seeming,
That once so proud o'er the cheering crowd
Had carried its colors gleaming:
Stained with mould were the braids of gold,
That had flashed at the sun-ray's kissing;
Of faded hue was its field of blue,
And some of the stars were missing.

Three Northern maids and three from glades
Where dreams the South-land weather,
With glances kind and their arms entwined,
Came up the stair together:
They gazed awhile, with a thoughtful smile,
At the crouching form before them;
With clinging holds they grasped its folds.
And out of the darkness bore them.

They healed its scars, they found its stars,
And brought them all together
(Three Northern maids and three from glades
Where smiles the South-land weather);
They mended away through the summer day,
Made glad by an inspiration
To fling it high at the smiling sky,
On the birthday of our nation.

In the brilliant glare of the summer air,
With a brisk breeze round it creeping,
Newly bright through the glistening light,
The flag went grandly sweeping:
Gleaming and bold were its braids of gold,
And flashed in the sun-ray's kissing;
Red, white, and blue were of deepest hue,
And none of the stars were missing.

~ written by Will Carleton, published in 1873

I love how the girls came together despite
their possible differences ~ to accomplish something
far greater than themselves.

Thanks for stopping by!
Posted by Lilac & Lavender at Monday, January 16, 2012