I love this picture.  Little Helen looks so happy with all those kittens in her arms.  My grandma, Helen Louise, was born to Alvin and Clara Mae Culbertson on August 24th of 1928.  She was the youngest of her siblings.  When she was about 9 months old, her mother, Clara Mae, died tragically as the result of a fire.  Her older sisters filled in as a mother figure, even after her father re-married.  I can only imagine how she might have felt, never really knowing her mother.  One thing I can say is... that loss never made her bitter.  In fact, she was one of the most loving people I've ever known. 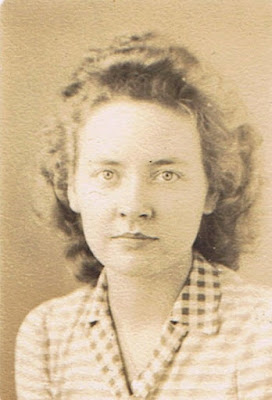 Helen grew to be a beautiful, shy young woman.  She met a handsome man, Clarence Donald Leasure, who was 12 years her senior.  Once she told my mom she fell for his "dark hair and nice blue eyes."  They were married, and the following year had their first of seven children.

Two days after she turned 30, she had her sixth child and second daughter, Sherry Jean.  My mother.  By the time she was born, the Leasures were already settled in a home on Oak Street in Bremen, Ohio.  Helen was a homemaker while her husband worked for Stuart Burial Vaults.  His job required long hours and often he came home bone-tired.  She always looked after him and was there for her children as well.  I don't know how she did it.  I find it's hard taking care of my husband and 2 children, let alone 5 more...


Grandma loved being in the kitchen.  In the summer she'd send her children off to pick berries for pie before they could go swimming.  She'd bake several pies at once, and they'd disappear in no time.  When making pancakes, she'd stand endlessly mixing, pouring and flipping.  She never ate until everyone else was full.  That could take awhile considering all the stomachs she was filling.  Even when supplies for baking were scarce, she'd make a simple pie with a filling of milk, flour, and sugar.  Few of her recipes came from cookbooks, and she didn't use timers.  She cooked and baked with her intuition.

I remember Grandma Leasure as a kind, loving, selfless woman.  She would do anything to take care of you.  She always kept a fresh supply of homemade chocolate-chip cookies stashed on top of the washing machine (I never questioned why).  She'd offer us one or two after coming in to the kitchen.  Come to think of it, most visits centered around that room.  When we left her house, I always gave her the biggest, tightest squeeze I could manage.  It was a child's simple expression of love towards her, and I always knew she understood.

Grandma's favorite hymn was "The Old Rugged Cross."  My mom would sing it to her in the final days as it was one of few things that brought her comfort.  The final verse:


To that old rugged cross I will ever be true,
It's shame and reproach gladly bear;
Then He'll call me some day to my home far away,
Where His glory forever I'll share...
There is so much more to my Grandma, Helen Leasure's story.  She wasn't famous, or wealthy in the sense of money.  Few knew her.  Those who knew her though... they were truly blessed.  I hope someday to leave behind a legacy of love that lasts for generations, just as she's already done.  Whenever I hear or sing "The Old Rugged Cross" I think of her.  I know why this song comforted her, as it now comforts me.  I know in heaven someday, His glory forever we'll share.  The only difference between us is... she's already wearing her crown.
So I'll cherish the old rugged cross,
'Til my trophies at last I lay down;
I will cling to the old rugged cross,
And exchange it someday for a crown.
Love you Grandma...
Posted by Lilac & Lavender at Wednesday, April 13, 2011

Email ThisBlogThis!Share to TwitterShare to FacebookShare to Pinterest
Labels: Family